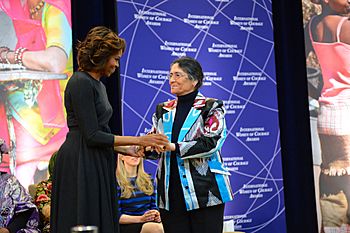 Oinikhol Bobonazarova is a Tajikistani human rights activist. In 2014 she received the International Women of Courage Award from the U.S. Department of State.

In 1993, the Tajik government arrested Bobonazarova. They said Bobonazarova planned to take over the government by violence. Bobonazarova was in jail for a few months. Then she became a human rights counselor in the Tajik office of the Organization for Security and Cooperation in Europe. She also worked for the Tajik branch of the Open Society Foundation. In 2013, she became the head of the “Perspektiva Plus” human rights group. They work for the rights of prisoners, women, and Tajikistani labor migrants. She also worked to create Tajikistan's first independent prison monitoring program. In 2004, Tajik prisons closed to outsiders.

In 2013, Bobonazarova was the first woman to try to run for president in Tajikistan. Her campaign did not get enough signatures. She was the first Tajikistani woman to receive the International Women of Courage Award.

All content from Kiddle encyclopedia articles (including the article images and facts) can be freely used under Attribution-ShareAlike license, unless stated otherwise. Cite this article:
Oinikhol Bobonazarova Facts for Kids. Kiddle Encyclopedia.