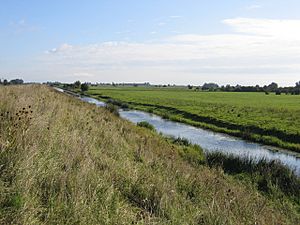 A section of the Old Bedford River near Mepal

The Old Bedford River is an artificial, partial diversion of the waters of the River Great Ouse in the Fens of Cambridgeshire, England. It was named after the fourth Earl of Bedford who contracted with the local Commission of Sewers to drain the Great Level of the Fens beginning in 1630.

The idea of an artificial river running, as the Old Bedford River does, from Earith to Denver was not a new idea; it had been proposed as early as 1604 by the engineer John Hunt. The work on the Old Bedford River was financed by the Earl of Bedford and several other investors and was undertaken between 1630 and 1636, but the supervising engineer is not known.

Artificial drainage of low-lying wetlands generally involves one or both of two different practices: excluding water flowing from high areas from entering the low-lying area, and pumping out water which does manage to get into the low-lying area. The Old Bedford River was constructed on the first principle, as were most of the drainage works constructed in the seventeenth century in the English fens. Both the Old Bedford River and the New Bedford River (constructed 20 years later in 1650) were intended to reduce or eliminate flooding of the fens of the Great Level by carrying the bulk of the water from the Great Ouse River from the uplands of Huntingdonshire to the sea in a straight channel, rather than allowing it to meander (and flood) the fens of the Great Level.

The flow in the Great Ouse is maintained for navigation, fisheries and aesthetic reasons but when there is excessive flow, the excess is diverted along the Bedford Rivers of which there are two, the Old and the New. Between them lies the Ouse Washes. This is not to be confused with the estuarine feature of The Wash towards which all this water is flowing. The Ouse Washes is an area in which excess fresh river water is stored until low tide permits its release or until flood levels elsewhere allow. The two rivers have raised banks (which in some parts of the world, would be called levees), so as to keep the flow within them but the outer bank in each case is higher so that when the flow becomes too great, the rivers fill the wash between them but not the farmland of the Middle and South Bedford Levels outside the banks. 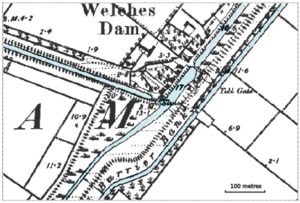 To facilitate the drainage of the washland, there is a third, unembanked river between the two Bedford Rivers, alongside the Old Bedford River and known as the River Delph. It drains into the New Bedford River 2 to 3 kilometres (1.2 to 1.9 miles) south of Denver Sluice.

All content from Kiddle encyclopedia articles (including the article images and facts) can be freely used under Attribution-ShareAlike license, unless stated otherwise. Cite this article:
Old Bedford River Facts for Kids. Kiddle Encyclopedia.