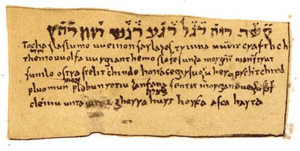 Photographic reproduction of the manuscript as published by Zappert (1859).

The discovery of an Old High German lullaby (Althochdeutsches Schlummerlied) was announced in 1859 by Georg Zappert (1806–1859) of Vienna, a private scholar and collector of medieval literature. Ostensibly a 10th-century poem full of surviving pre-Christian mythology, it is considered a literary forgery of Zappert by many experts who have commented on it.

According to Zappert, in 1852 he noted some words in Old High German on a strip of parchment glued to the spine of a 15th-century paper manuscript (Hofbibliothek Codex Suppl. No. 1668). Zappert says he purchased the manuscript in August 1858, as the recovering of the strip necessitated the destruction of the manuscript binding. Zappert reports that, once the strip was recovered, it turned out it bore an Old High German poem, apparently a lullaby, in five lines, in a hand of the 9th or 10th century:

Zappert reads this as seven alliterating verses, as follows:

translated: "(1) Docke, sleep speedily / leave off crying // (2) Triuwa forcefully / fends off the murdering wolf // (3) May you sleep until morning / dear man's son // (4) Ostara for the child leaves / honey and sweet eggs // (5) Hera for the child breaks / flowers blue and red // (6) Zanfana on the morrow sends // white little sheep // (7) and One-Eye, herra hurt, swift, hard spears." Docke is a term of endearment addressing the child. Triuwa is "truth" personified, Ostara is a hypothetical spring goddess, here portrayed as "leaving eggs for the child", which would be a striking attestation of a pagan origin of easter egg customs. Also extremely striking would be the survival of Tanfana, a theonym only attested by Tacitus in the 1st century, in Old High German form. "One-Eye" would be Wotan, also a very striking confirmation of the Eddaic tradition of Odin being one-eyed, otherwise unattested in West Germanic sources.

Preceding the Old High German text is a line in Hebrew, קשת רוח רגל רגע רגש רצון רחץ, a list of seven words from a glossary. On the back of the parchment is another line in Hebrew, חכמה ואדם יפיק תבונה לך אל , a fragment of two verses of Proverbs (the end of 3:13 and the beginning of 6:6). These appear to be pen trials. Based on this Zappert surmises (p. 12) that the manuscript is due to an early German Jew, perhaps a rabbi or physician, recording a lullaby he may have heard from a wetnurse employed in his house.

Some of the vowels of the lullaby are given in the form of Hebrew vowel points.

If authentic, the text would afford a rich source for Germanic paganism, giving more detail on the deities mentioned even than the Merseburg Incantations (discovered 1841). Johann Kelle (1860) had scathing criticism for Zappert's analysis, disagreeing with literally every one of Zappert's conclusions and emendations, but did not question the authenticity of the document. Jacob Grimm in Berliner Sitzungsberichte, 1859, 254—58 refers to Zappert's publication as an independent attestation of the name Zanfana, apparently without doubting its authenticity. In fact, Edwards (2002, p. 150) claims that J. Grimm intended to publish a defence of the lullaby, and “stood out from the beginning because of his enthusiastic advocacy of the lullaby”.

But Grohmann (1861) in a 46-page essay examines the poem in detail and concludes that it is clearly a falsification. Since Zappert had died in 1859, he could not defend his position.

Kletke (1867) still considers the text genuine, but the mainstream opinion in the late 19th century and until today remains Grohmann's. Nevertheless, there have been a few 20th-century scholars defending the poem's authenticity (see Diamant 1960, Howard 1976).

Fichtenau (1970) again concludes that without a doubt, the poem is a falsification. Edwards (2002, p. 158) states that from six essays which appeared on the topic of the lullaby during the 20th century, three consider it a forgery, while three declare it as genuine. Edwards himself (p. 161) concludes that the evidence adduced in his essay against the authenticity of the lullaby “points more than one finger of suspicion, but falls short of certainty”.

Arguments in favour of the authenticity:

Arguments against the authenticity:

All content from Kiddle encyclopedia articles (including the article images and facts) can be freely used under Attribution-ShareAlike license, unless stated otherwise. Cite this article:
Old High German lullaby Facts for Kids. Kiddle Encyclopedia.