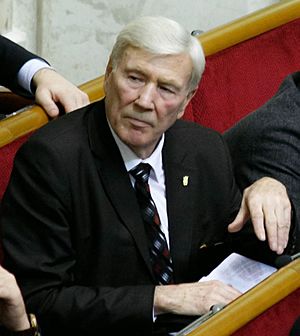 Oleksandr Oksentiyovych Shevchenko (Ukrainian: Олександр Оксеньтійович Шевченко; 26 June 1937 – 15 January 2016) was a Ukrainian scientist, judge, politician, and teacher. He was the deputy of the Svoboda party from 2012 to 2014. He was later a member of the Petro Poroshenko Bloc until 15 September 2015. He supported the right to bear arms and was against the death penalty. He was born in Simferopol Raion, Crimea, Russian SFSR, Soviet Union.

All content from Kiddle encyclopedia articles (including the article images and facts) can be freely used under Attribution-ShareAlike license, unless stated otherwise. Cite this article:
Oleksandr Shevchenko Facts for Kids. Kiddle Encyclopedia.