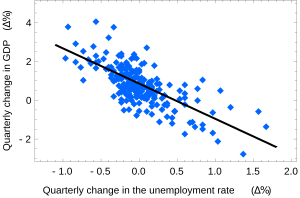 Okun's law in macroeconomics states that in an economy the GDP growth should depend linearly on the changes in the unemployment rate. Here the ordinary least squares method is used to construct the regression line describing this law. The observed values are shown in blue, the expected ones are shown in black.

All content from Kiddle encyclopedia articles (including the article images and facts) can be freely used under Attribution-ShareAlike license, unless stated otherwise. Cite this article:
Ordinary least squares Facts for Kids. Kiddle Encyclopedia.