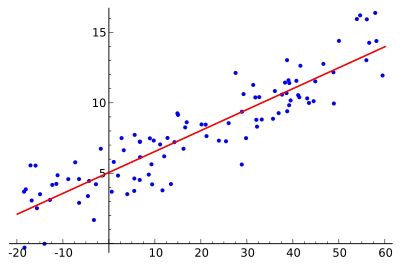 The idea is to find the red curve, the blue points are actual samples. With linear regression all points can be connected using a single, straight line. This example uses simple linear regression, where the square of the distance between the red line and each sample point is minimized.

Linear regression is a way to explain the relationship between a dependent variable and one or more explanatory variables using a straight line. It is a special case of regression analysis.

Linear regression has many practical uses. Most applications fall into one of the following two broad categories:

Linear regression models try to make the vertical distance between the line and the data points (e.g the residuals) as small as possible. This is called "fitting the line to the data." Often, linear regression models try to minimize the sum of the squares of the residuals (least squares), but other ways of fitting exist. They include minimizing the "lack of fit" in some other norm (as with least absolute deviations regression), or minimizing a penalized version of the least squares loss function as in ridge regression. The least squares approach can also be used to fit models that are not linear. As outlined above, the terms "least squares" and "linear model" are closely linked, but they are not synonyms.

Linear regression is the main analytical tool in economics. For example, it is used to guess consumption spending, fixed investment spending, inventory investment, purchases of a country's exports, spending on imports, the demand to hold liquid assets, labor demand, and labor supply.

All content from Kiddle encyclopedia articles (including the article images and facts) can be freely used under Attribution-ShareAlike license, unless stated otherwise. Cite this article:
Linear regression Facts for Kids. Kiddle Encyclopedia.