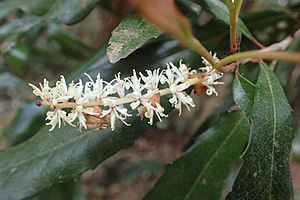 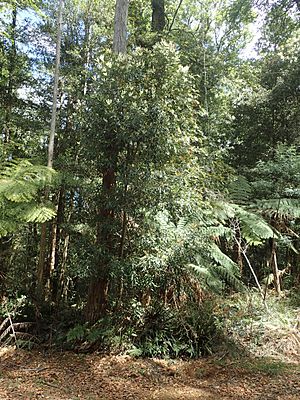 Orites excelsus, commonly known as prickly ash, mountain silky oak or white beefwood, is a species of flowering plant in the family Proteaceae and is endemic to eastern Australia. It is a medium-sized to tall rainforest tree with oblong to lance-shaped leaves, variously lobed and with teeth on the edges. The flowers are white and arranged in leaf axils in spikes that are shorter than the leaves.

Orites excelsus was first formally described in 1830 by Robert Brown in Supplementum primum Prodromi florae Novae Hollandiae from specimens collected by Charles Fraser near the Hastings River in 1818.

Fossils of lobed leaves closely resembling juvenile leaves of O. excelsus have been recovered from the early to middle Eocene Taratu Formation near Livingstone in northern Otago, New Zealand. They have been provisionally classified as close to this species, though a resemblance to Athertonia diversifolia has been noted.

The timber of prickly ash has been used for shingles, casks, furniture and joinery.

All content from Kiddle encyclopedia articles (including the article images and facts) can be freely used under Attribution-ShareAlike license, unless stated otherwise. Cite this article:
Orites excelsus Facts for Kids. Kiddle Encyclopedia.