Our Boys Institute facts for kids 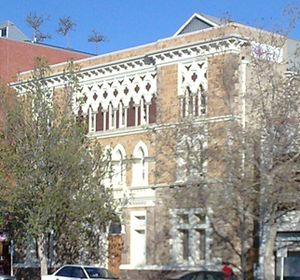 Our Boys Institute (OBI) was a junior branch of YMCA. Opened in 1896, the club was housed in a purpose-built premises at 221 Wakefield Street, Adelaide, South Australia, Australia.

The Our Boys Institute included lecture and games rooms, indoor running track, pool, and was available for boys aged 13–18, a forefunner to the various youth groups which flourished in the first half of the twentieth century such as the Boys' Brigade, Scouting, etc.

The Our Boys Institute promoted a Christian philosophy and also ran camps and provided employment assistance for young men. 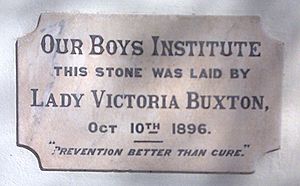 Plaque located on facade of building.

F.W. Danker was the architect for the building. The carved sandstone Venetian Gothic facade of the building was listed on the South Australian Heritage Register on 24 July 1980. The facade of the Our Boys Institute bears similarities to the Chicago Athletic Club; it has been suggested that Danker was influenced by the club and its architect, Henry Ives Cobb.

The building has since been used as office space and an external studies college and was converted by architects JPE Design Studio to a boutique hotel in 2008. The hotel opened as Wakefield Residence but has since changed the name to Adabco Boutique Hotel.

A plaque on the facade of the building shows the role played by the wife of the South Australian Governor, Sir Thomas Buxton, 3rd Baronet, Lady Victoria Buxton. Lady Buxton was a Christian Philanthropist who supported the Mothers' Union and YWCA and who resided in Adelaide between 1895 and 1898.

Our Girls' Institute was a similar organization run under the auspices of the YWCA. Phoebe Chapple (1879–1967) and Edith Lavington Tite (1877–1955) were prominent leaders.

All content from Kiddle encyclopedia articles (including the article images and facts) can be freely used under Attribution-ShareAlike license, unless stated otherwise. Cite this article:
Our Boys Institute Facts for Kids. Kiddle Encyclopedia.