Our Lady of La Salette facts for kids

Our Lady of La Salette is a title given to the Virgin Mary who is believed to have appeared at the village of La Salette, France. The apparition was reported by two children, Maximin Giraud, and Melanie Calvat. In French she is called Notre-Dame de La Salette. 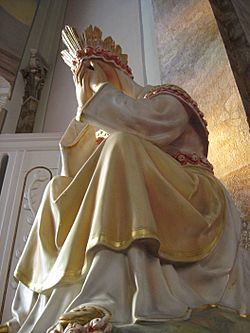 On 19 September 1846, Maximin Giraud and Melanie Calvat reported seeing the Virgin Mary weeping on Mount Sous-les Baisses. According to their account, the Virgin Mary continued to weep as she spoke to them, first in French, then in their own dialect. After the woman spoke to them, she vanished. The following day the children's account of the apparition was put into writing and signed by the children and those who had heard the story. 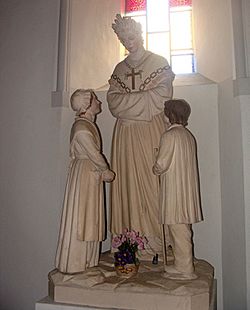 Statue depicting Our Lady of La Salette speaking to the two children.

The visionaries sent two secrets to Pope Pius IX - one given to each of them, which they never revealed to one another. The Pope never made the two secrets public. However Melanie published the secrets in a pamphlet with the local bishop's approval. The Church condemned the published secret. Melanie, later in life, was known to have been disturbed by reading apocalyptic books and similar materials.

John Paul II stated: As I wrote on the occasion of the 150th anniversary, "La Salette is a message of hope, for our hope is nourished by the intercession of her who is the Mother of mankind".

The message of the visionaries of La Salette focuses on the conversion of all humanity to Christ. Though La Salette's message is embedded in the bygone environment of the nineteenth century, rural France, it has had a tremendous impact on the modern world. Saints (for example, John Vianney), pastors (such as Don Bosco), and religious writers (like J.K. Huysmans) have all been influenced by La Salette. The spirit of La Salette is one of prayer, conversion, and commitment.

All content from Kiddle encyclopedia articles (including the article images and facts) can be freely used under Attribution-ShareAlike license, unless stated otherwise. Cite this article:
Our Lady of La Salette Facts for Kids. Kiddle Encyclopedia.