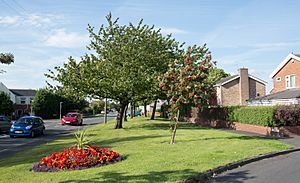 A small green in Ouston

Ouston is a village in County Durham, about 8 miles (13 kilometres) south-west of Newcastle upon Tyne in the north-east of England. The main village of Ouston (formerly called Ulkerton in earlier medieval times) is adjoined by the 1970s built housing estate known as Urpeth Grange but both are referred to colloquially as Ouston by locals. The population of the parish taken at the 2011 census was 2821.

There are two pubs: the Red Lion in Ouston and The Cherry Tree in Urpeth Grange. A Working men's club (The Ranch) is also situated in the neighbouring village of Perkinsville. Shops are limited to a Post Office located in the petrol station, a hairdressers and a couple of general stores. Organisations based in the village include the Ouston and Urpeth Conservation Volunteers and the Ouston Villagers Association

The village itself was mostly constructed in 1961 with the showhomes being in Ardrossan opposite the Junior School which opened in 1964. Over time the village expanded to its current size with further expansion continuing from Penhill, Urpeth, in the early 1970s onwards. In recent years the housing development has rebegun in earnest in Turnberry and Woodlands, the former being a disused farmer's field with some World War II bunkers in it and the latter being an area next to the council estate (The Brooms) in an area near Walter's Wood.

Ouston is a quiet village with only one main road through it, which even at busy times of the day is still quiet. The village is surrounded by countryside, farm life and stunning views of Newcastle upon Tyne.

All content from Kiddle encyclopedia articles (including the article images and facts) can be freely used under Attribution-ShareAlike license, unless stated otherwise. Cite this article:
Ouston, County Durham Facts for Kids. Kiddle Encyclopedia.