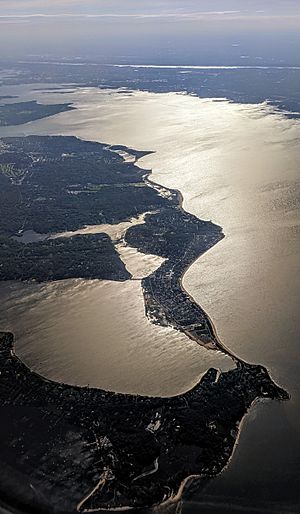 Marine invertebrate and fish communities support a complex food web from waterfowl to fish-eating birds, to marine mammals. Waterfowl use of the Refuge peaks from October through April. Over 20,000 ducks have been documented on the refuge during one survey. Over 25 species of waterfowl, along with numerous other waterbirds, depend on Oyster Bay for survival. The most common marine mammals at the refuge are harbor seals - which have become more noticeable during recent years. Sea turtles and diamondback terrapins can also be sighted at the Refuge.

All content from Kiddle encyclopedia articles (including the article images and facts) can be freely used under Attribution-ShareAlike license, unless stated otherwise. Cite this article:
Oyster Bay National Wildlife Refuge Facts for Kids. Kiddle Encyclopedia.