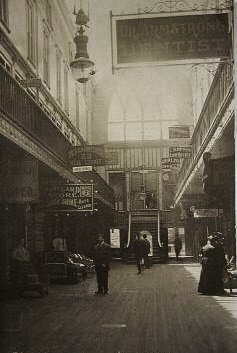 At No. 1 Public Square, the arcade remains the benchmark structure in Watertown's historic downtown district. The structure runs perpendicular to the adjoining Paddock Building. The arcade was built in the Gothic style, topped with a glass roof that allowed daylight to filter through. The Paddock Building contains a 19th-century Italianate facade.

The arcade was built by Watertown native Loveland Paddock and designed by architect Otis Wheelock. It was based on similar arcades built during that era in the United States and Europe. Shops occupied the bottom floor, while the upper floors were used for office space.

In about 1916, a large section of the Paddock Building was demolished to make way for the six-story Woolworth Building. In the 1920s, arcade owners put forth a major redesign of the arcade, eschewing its original Gothic interior with a more modern design, which included the installation of the current translucent, steel-and-wire-glass dropped ceiling between its second and third stories. This ceiling still allowed light to filter in from the arcade's glass roof. 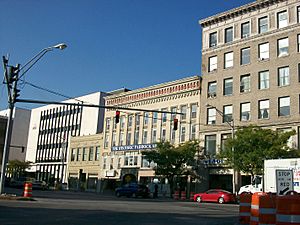 The Paddock Building (second from right)

The arcade still functions as a shopping and business center in Watertown's downtown district. In recent years, structural and aesthetic improvements, coupled with new businesses are helping to guarantee the arcade's future. The arcade is the current (2013) home to Johnny D's Casual Dining, Paddock Club Tavern, Steve Weed Productions, The Village Peddler bicycle shop, Paddock Antiques, Europe Cakes, Satyana Yoga, Beauty Bar, Vito Gourmet, Bova Photography. In 2007, it was announced that the arcade would be host to Watertown's popular farmers' market for its extended fall season.

All content from Kiddle encyclopedia articles (including the article images and facts) can be freely used under Attribution-ShareAlike license, unless stated otherwise. Cite this article:
Paddock Arcade Facts for Kids. Kiddle Encyclopedia.