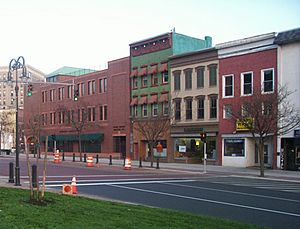 Public Square's North Side. The modern office building on the left blends in with the 19th-century buildings to its right.

While the square boasts some modern architecture, its main character is defined by the numerous 19th- and early 20th-century buildings that still stand. Throughout its buildings, the square is host to a multitude of shops, restaurants, business offices, churches and apartment houses, making it a major shopping and business destination in the city. 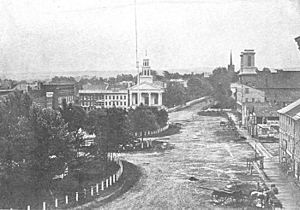 Public Square's East Side circa 1865.

A panoramic view of Public Square circa 1909.

Watertown's first settlers built their homesteads on what is now the square's West End in 1800. In 1805, several settlers donated land for public use which became the basis of the square. This helped to develop the square as Watertown's main business district. The current layout of the square and its surrounding streets developed in those early years.

In 1849, most of Public Square and buildings on three adjacent streets were destroyed by fire. The square was immediately rebuilt. Several buildings erected during the rebuilding still stand. In the rebuilding of the 1850s, the city created three parks at the square's center, with a fountain inside the center park. During Watertown's industrial boom in the late 19th and early 20th centuries, Public Square became the heart of Watertown's retail, business and social life. In the 1950s, the three parks in the square's center were combined into one large park.

The Soldiers and Sailors Monument was added in 1891.

The square's retail and business dominance started declining in the latter half of the 20th century. Urban renewal policies during the 1960s and 1970s resulted in the demolition of some of the square's historic structures. Declining industry hurt Watertown's once prospering economy. Although nearby the Fort Drum military reservation expanded in the 1980s and brought growth to the Watertown, modern shopping malls and retail chains built on the city's west side drew business away from the square. Public Square's days as the city's main retail destination were at an end. The square continued its slow decline over the next 20 years. 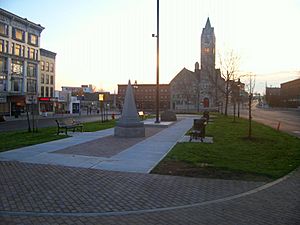 New landscaping and brickwork adorn Public Square Park after the completion of the multimillion-dollar renovation project in 2008.

The beginning of the 21st century saw a reversal in attitudes towards Public Square. With a resurgence of pride in the square and its role in Watertown's history, civic and business leaders have taken a strong role in its redevelopment. Existing buildings were refurbished and new businesses moved in. Some decaying structures beyond repair were demolished. In 2006, the new economic development was coupled with a multimillion-dollar streetscape project to reinforce the square's infrastructure, as well as beautify its roads, walkways and landscaping. This project was completed in November, 2008. 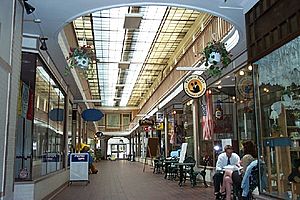 Public Square has been the site of many notable people, buildings and inventions.

All content from Kiddle encyclopedia articles (including the article images and facts) can be freely used under Attribution-ShareAlike license, unless stated otherwise. Cite this article:
Public Square (Watertown, New York) Facts for Kids. Kiddle Encyclopedia.