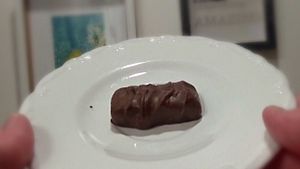 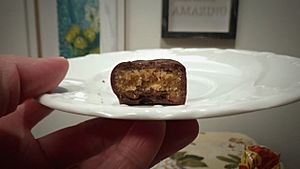 The interior of a Pal-O-Mine bar.

Pal-o-Mine is a chocolate bar which consist of a peanut fudge middle covered in dark chocolate. The standard 55 gram (2 oz) package includes two pieces. It is produced by Ganong in New Brunswick, Canada.

Arthur Ganong used to go fishing with Ganong chocolatier George Ensor, and they would take chunks of chocolate along in their pockets. However, they found that the chocolate would melt in their pockets and make a mess, so they wrapped bars of chocolate in cellophane. In 1898, Ganong started selling individually-wrapped chocolate bars, the first company to do so in North America. In 1910, Ganong added nuts to their chocolate bars, and they started using the name "Pal-o-Mine" in 1920. (According to one version of the story, Ganong and Ensor would give the leftover chocolate to local children, and one girl would say "you’re a Pal of mine" every time she got some.) Pal-o-Mine became Ganong's longest-lasting chocolate bar brand.

All content from Kiddle encyclopedia articles (including the article images and facts) can be freely used under Attribution-ShareAlike license, unless stated otherwise. Cite this article:
Pal-o-mine Facts for Kids. Kiddle Encyclopedia.