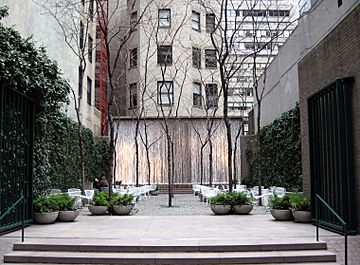 Paley Park is a pocket park located at 3 East 53rd Street between Madison and Fifth Avenues in Midtown Manhattan, New York City, on the former site of the Stork Club. Designed by the landscape architectural firm of Zion Breen Richardson Associates, it opened May 23, 1967. Paley Park is often cited as one of the finest urban spaces in the United States.

Measuring 4,200 square feet (390 m2), the park contains airy trees, lightweight furniture and simple spatial organization. A 20-foot (6.1 m) high waterfall, with a capacity of 1,800 US gallons (6,800 l) per minute, spans the entire back of the park. The waterfall creates a backdrop of grey noise to mask the sounds of the city. The park is surrounded by walls on three sides and is open to the street (with an ornamental gate) on the fourth side, facing the street. The walls are covered in ivy, and an overhead canopy is formed by honey locust trees. 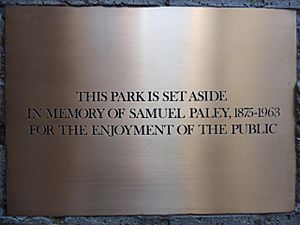 A privately owned public space, Paley Park was financed by the William S. Paley Foundation and was named by Paley for his father, Samuel Paley. A plaque near the entrance reads: "This park is set aside in memory of Samuel Paley, 1875–1963, for the enjoyment of the public."

A wheelchair ramp is positioned on either side of the four steps that lead into the park which is elevated from the sidewalk level. The park displays a unique blend of synthetic materials, textures, colors and sounds. The wire mesh chairs and marble tables are light, while the ground surfaces are rough-hewn granite pavers which extend across the sidewalk to the street curb. The honey locust trees were planted at 12-foot (3.7 m) intervals. The green of the ivy-covered side walls ("vertical lawns") contrast with colorful flowers.

Paley Park is located one-and-a-half blocks from the Paley Center for Media, which was next door to the park (as the Museum of Broadcasting)

In 1968, Paley Park and the Ford Foundation Building shared an Albert S. Bard Civic Award, distributed to structures that exhibited "excellence in architecture and urban design".

Social interaction in the park was analyzed in the film The Social Life of Small Urban Spaces by William H. Whyte.

Paley Park served as the inspiration for a similarly sized urban park in Charleston, South Carolina, that opened in June 2015 and is known as Theodora Park.

All content from Kiddle encyclopedia articles (including the article images and facts) can be freely used under Attribution-ShareAlike license, unless stated otherwise. Cite this article:
Paley Park Facts for Kids. Kiddle Encyclopedia.