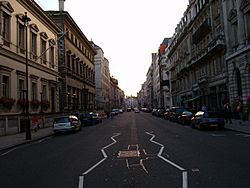 Pall Mall is a street in the City of Westminster, London. It is parallel to The Mall. Pall Mall East leads into Trafalgar Square.

The street's name is taken from a game called 'pall mall'. The game was a mallet-and-ball game played in the early 17th century.

Pall Mall is probably best known for its many gentlemen's clubs.

All content from Kiddle encyclopedia articles (including the article images and facts) can be freely used under Attribution-ShareAlike license, unless stated otherwise. Cite this article:
Pall Mall Facts for Kids. Kiddle Encyclopedia.