The pallid shiner (Hybopsis amnis) is a small freshwater minnow in the family Cyprinidae. Its synonym is Notropis amnis. They are native to North America and can be found in the Mississippi watershed. The pallid shiner is considered a rare fish in its northern distribution but not in its southern distribution. The pallid shiner was first discovered in the early 1900s in the St. Croix river north of Taylor Falls, and its population has been declining since. Little is known about their feeding and reproductive habits.

The pallid shiner is a small silver fish with very little pigmentation on its fusiform body and like most fishes, it is laterally flattened. The only marking on its body is a thin lateral stripe that extends from its head to its tail. The scales on its body are composed of round lateral scales called cycloid scales. It has a slightly subterminal mouth and no adipose fin. Like other members of the family Cyprinidae, the pallid shiner is a toothless fish and has no stomach. Instead they chew their food using gill rakers on their gills and pharyngeal teeth. Its caudal fin is white and is forked with pointed tips. The dorsal fin of the pallid shiner is high and has eight soft rays. The pelvic fins are abdominal. 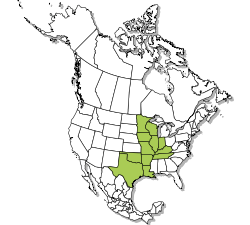 Distribution of the Pallid Shiner fish in United States

As mentioned before, the pallid shiner is distributed in many rivers. These rivers are typically medium to large rivers. They can also be found more downstream of sand and gravel bars in streams. Pallid shiners prefer slow moving waters and quiet waters over sand and silty bottoms. Because of increased human activity in the rivers that they are found, sedimentation has become more of a problem for the pallid shiners.

The pallid shiner is listed as least concern because, although its distribution and abundance have been reduced, the number of subpopulations and populations are still relatively large and have not declined greatly. Until recently the pallid shiner was thought to have become regionally extinct in Illinois, but was then rediscovered in the Kankakee River. It has been affected by sedimentation and increased human activity in the rivers that it is found in.

All content from Kiddle encyclopedia articles (including the article images and facts) can be freely used under Attribution-ShareAlike license, unless stated otherwise. Cite this article:
Pallid shiner Facts for Kids. Kiddle Encyclopedia.