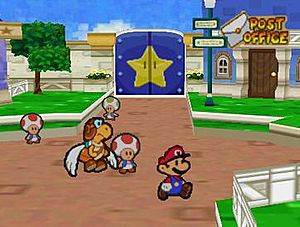 Paper Mario is a roleplaying video game for the Nintendo 64, first released in 2000. It was later released for Virtual Console on the Wii in 2007. It is Mario's second RPG.

A mail Paratroopa, later in the game known as Parakarry, lends a letter to Mario and Luigi, who are at home in their house. The letter is from Princess Peach. She asks Mario and Luigi to come to a party of hers. So Mario and Luigi set out. The party is set in Princess Peach's Castle. While Luigi stays in the lobby, Mario goes upstairs to find Peach. Peach asks Mario to come with her so they can chat in peace. But as soon as they begin to walk, the castle begins to crumble. The player can see that the castle is actually raising into space, but Peach and Mario are confused, especially since they can see stars outside in the middle of the day. Then, all of a sudden, King Bowser smashes through the window riding his Koopa Clown Car. He has his companion Kammy Koopa with him. As soon as Bowser tells Peach and Mario that he was the one who lifted the castle into space using the Star Rod with the purpose of kidnapping Peach, Mario begins to fight him, despite the failures of the past. However, this time, just as Bowser says, is different, because Bowser has the Star Rod. In the middle of the fight, he transforms himself into Rainbow Bowser, making him stronger and invincible. Of course, there is no way Mario can defeat Bowser now. So Bowser simply destroys Mario. After his job is done, he throws Mario out into space, followed by Koopatrols taking Peach to her room. Meanwhile, Mario falls miles towards the Earth.

All content from Kiddle encyclopedia articles (including the article images and facts) can be freely used under Attribution-ShareAlike license, unless stated otherwise. Cite this article:
Paper Mario Facts for Kids. Kiddle Encyclopedia.