Papilio rutulus, the western tiger swallowtail, is a swallowtail butterfly belonging to the Papilionidae family. It is a member of the genus Papilio, of which Papilio appalachiensis and Papilio xuthus are also members. The species was first described by Hippolyte Lucas in 1852.

These butterflies are frequently seen in urban parks and gardens, as well as in rural woodlands and riparian areas. 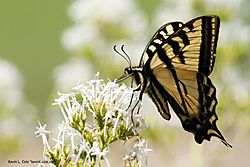 Papilio rutulus can reach a wingspan of 7 to 10 cm (3 to 4 in). These large butterflies are brightly colored. The wings are yellow with black stripes and blue and orange spots near their tail. They have the "tails" on the hindwings that are often found in swallowtails.

Young caterpillars resemble bird droppings, and as they molt, they eventually turn bright green, with a pair of large yellow eyespots with black and blue pupils. The chrysalis is green in summer and dark brown in winter, and looks like a piece of wood.

Butterflies emerge from winter chrysalids between February and May, the date depending on the temperature, so they are seen earlier in the more southerly and more coastal parts of their range. They are very active butterflies, rarely seen at rest. The adult females lay up to a hundred eggs in total. The eggs are deep green, shiny, and spherical. They are laid singly, on the undersides of leaves.

The caterpillars emerge about four days later. They can feed on the leaves of a variety of trees, and the predominant food plant varies across their range; trees commonly used include cottonwood, willow, quaking aspen, and many others.

The males often congregate, along with other species of swallowtail, at pools and along streams and rivers; they drink from the water and mud, extracting minerals, as well as moisture.

All content from Kiddle encyclopedia articles (including the article images and facts) can be freely used under Attribution-ShareAlike license, unless stated otherwise. Cite this article:
Papilio rutulus Facts for Kids. Kiddle Encyclopedia.