Pardalotes are a family, Pardalotidae, of very small, brightly coloured birds native to Australia, with short tails, strong legs, and stubby blunt beaks. This family is composed of four species in one genus, Pardalotus, and several subspecies. The name derives from a Greek word meaning "spotted". The family once contained several other species now split into the family Acanthizidae.

Pardalotes spend most of their time high in the outer foliage of trees, feeding on insects, spiders, and above all lerps (a type of sap-sucking insect). Their role in controlling lerp infestations in the eucalyptus forests of Australia may be significant. They generally live in pairs or small family groups but sometimes come together into flocks after breeding.

Pardalotes are seasonal breeders in temperate areas of Australia but may breed year round in warmer areas. They are monogamous breeders, and both partners share nest construction, incubation and chick-rearing duties. All four species nest in deep horizontal tunnels drilled into banks of earth. Externally about the size of a mouse-hole, they can be very deep, at a metre or more. Some species also nest in tree hollows.

The pardalotes consist of several species contained in a single genus, Pardalotus, with the general consensus being to recognise four species. The placement of the genus has varied, being first placed with the mostly oriental flowerpeckers (Dicaeidae), as both groups are dumpy-looking birds with bright plumage. In addition both groups have a reduced tenth primary (one of the flight feathers). Genetic analysis has shown that the two groups are in fact not closely related, and that the pardalotes are instead more closely related another Australian family, the Acanthizidae, which includes the scrubwrens, gerygones and thornbills. The two are sometimes merged into one family; when this is done the combined family is known as Pardalotidae, but the two groups have also been treated as two separate families.

The pardalotes are small, compact birds that range in size from 8.5–12 cm (3.3–4.7 in) in length. The spotted and striated pardalotes conform to Bergmann's rule and are larger in the south than they are in the north. The males and females are the same size as each other, but there are some differences in the plumage of some species. They have short, square-tipped tails and relatively short rounded wings (which are longer in the more dispersive species). The bill is short, deep and robust, but lacks the rictal bristles that surround the bills of many other insectivorous birds. 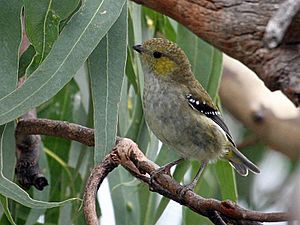 The forty-spotted pardalote is endemic to Tasmania

The pardalotes are endemic to Australia. The forty-spotted has the most restricted distribution of the four species, being endemic to Tasmania; in contrast the most widespread species, the striated pardalote, is found throughout Australia, only absent from some of the driest areas of the inland central and western deserts. The red-browed pardalote is widespread in the north and west of Australia, whereas the spotted pardalote is found closer to the coast in southern and eastern Australia.

The family are eucalyptus forest specialists. While they may occur in forests and woodlands dominated by other tree types, these are marginal habitats for the family and are seldom used. Pardalotes occupy a wide range of eucalypt habitats, from tall forests with a canopy over 30 metres (100 ft) high to low mallee woodlands with a canopy of just 3 metres (10 ft).

Pardalotes are almost exclusively insectivores. They will occasionally consume some plant materials including seeds, and there has been an observation of one striated pardalote beating and then eating a lizard. They feed singly or in pairs during the breeding season, but have been recorded as joining mixed-species feeding flocks in the winter months. The majority of foraging occurs on Eucalyptus, with other trees being used much less frequently; among the eucalyptus, trees from the subgenus Symphyomyrtus are preferred. Pardalotes forage by gleaning insects from the foliage, as opposed to catching insects while flying. Pardalotes may consume a number of different types of insects, but lerps – a honeydew casing exuded by insects of the family Psyllidae – form the major component of their diet and the one to which they are most adapted. These lerps are also highly sought after by the larger honeyeaters, which aggressively defend the resource. A study of pardalotes in Australia estimated that 5% of a pardalote's day is spent evading honeyeater attacks.

All content from Kiddle encyclopedia articles (including the article images and facts) can be freely used under Attribution-ShareAlike license, unless stated otherwise. Cite this article:
Pardalote Facts for Kids. Kiddle Encyclopedia.