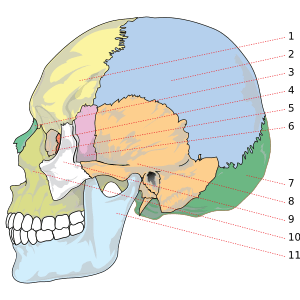 A lateral (side) view of the human skull. The parietal bones have the number 2.

The parietal bones are bones that are part of the human skull. They form the sides and the roof of the cranium. The Latin name for one such bone is os parietale. The musculus temporalis, which is used for chewing, is attached to the parietal bone.

All content from Kiddle encyclopedia articles (including the article images and facts) can be freely used under Attribution-ShareAlike license, unless stated otherwise. Cite this article:
Parietal bone Facts for Kids. Kiddle Encyclopedia.