Parmelia Bank is a sandbank to the north of Cockburn Sound, off Fremantle, Western Australia within the limits of the Fremantle Outer Harbour. The Parmelia Bank is named after the barque Parmelia, which grounded on the sandbank in 1829.

Parmelia Bank, south of Success Bank, is a slightly smaller bank than the latter and runs approximately parallel to it, about 3 kilometres (1.9 mi) further south extending from Woodman Point, almost to Carnac Island; it also is within the designated Fremantle Outer Harbour. The channel through this bank is likewise named after the bank - Parmelia Channel that leads into Cockburn Sound. 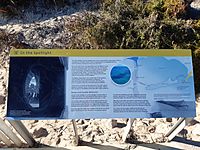 Information board about the barrier at Cape Peron, site of the former Peron Battery

All content from Kiddle encyclopedia articles (including the article images and facts) can be freely used under Attribution-ShareAlike license, unless stated otherwise. Cite this article:
Parmelia Bank Facts for Kids. Kiddle Encyclopedia.