Garden Island is a slender island about 10 kilometres (6 mi) long and 1.5 kilometres (0.9 mi) wide, lying about 5 kilometres (3 mi) off the Western Australian coast, to which it is now linked by a man-made causeway.

Like Rottnest Island and Carnac Island, it is a limestone outcrop covered by a thin layer of sand accumulated during an era of lowered sea levels. The Noongar Indigenous Australians tell of walking to these islands in their Dreamtime.

At the end of the last glacial period, the sea level rose, cutting the island off from the mainland. For the last seven thousand years the island has existed in relative isolation.

The Royal Australian Navy's largest fleet base, Fleet Base West, also called HMAS Stirling, are on the shores of Careening Bay, on the southeastern section of Garden Island, facing Cockburn Sound.

Garden Island is home to a tammar wallaby population. 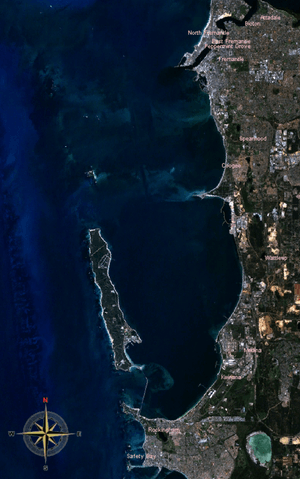 The island was marked but not named on Dutch maps in 1658, even though there were three Dutch ships in the area that year: the Waekende Boey under Captain S. Volckertszoon, the Elburg under Captain J. Peereboom and the Emeloort under Captain A. Joncke. However, it was outlined on the charts of the Southland, which were published after Willem de Vlamingh visited the region in 1697.

Jacques Felix Emmanuel, Baron Hamelin was the Captain of the Naturaliste, one of three French ships that visited in 1801 to 1803. He named the island "Ile Buache" after Jean Nicolas Buache, a marine cartographer in Paris. The island was renamed "Garden Island" in 1827 by Captain James Stirling, who "prepared a garden and released a cow, two ewes and three goats in an area of good pasture with good water supply." It has been widely believed that Stirling chose the name "Garden Island" because he planted a garden there, but Statham-Drew (2003) notes that he used the name well before anything was planted there. She argues that it was so named because the shelter that it provides to Cockburn Sound was reminiscent of the way that the Isle of Wight, then known locally as the "Garden Isle", shelters the waters off Portsmouth.

Stirling returned to the area in 1829, claiming Garden Island as part of his grant of 100,000 acres (405 km2), plus any livestock remaining from the previous visit. The first settlement of 450 people was named Sulphur Town. Sulphur Bay and Careening Bay were important anchorage and cargo disembarkation points for ships until 1897 when Fremantle's inner harbour was completed.

In 1907 Peet & Co (now Peet Limited) subdivided eight-three blocks at Careening Bay. After World War I it became a holiday resort with wooden cottages erected at the bay. During World War II, gun batteries were located on Garden Island. These were part of an integrated coastal defence system for Fremantle Harbour facilities.

The biggest battery on Garden Island was the Scriven Battery, fitted with two breech-loading 9.2-inch MkX guns, similar to the Oliver Hill Battery on Rottnest Island. In 1943 building began on a complex of underground tunnels and rooms, included shell stores, magazines, pump chamber and power house, plotting room and command post, and battery observation posts. However, the threat of attack receded as the battery was completed. Resources were allocated elsewhere, and the battery and its guns were placed in reserve. The battery was decommissioned in 1963 and the guns scrapped.

During World War II Careening Bay Camp became a major training base for the secretive Services Reconnaissance Department (SRD), also commonly referred to as "Z Special Unit". The base was officially known as the Special Boat Section and was used to train operatives in the advanced use of folboat folding kayaks as well as top secret British midget submarines such as the "Motorised Submersible Canoe" ("Sleeping Beauty"), "Welman" and "Welfreighter" submarines. SRD Parties staging out of Careening Bay Camp were sent on clandestine missions into Japanese-occupied territory.

Following the war, Garden Island became a holiday resort again and the home of the RAN Reserve Fleet. 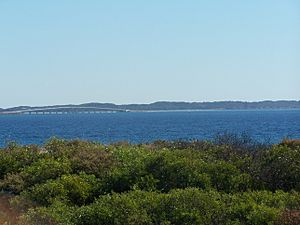 In 1966, a feasibility study began into establishment of a naval support facility on the island, which was endorsed by the Federal Government in 1969. Construction of the 4.3 kilometres (2.7 mi) Garden Island causeway began in 1971 and was completed in 1973. The facility was completed in 1978, and HMAS Stirling was formally commissioned as a unit of the Royal Australian Navy in the same year. Stirling, also referred to as Fleet Base West, was developed further under the Two-Ocean Policy to become the main naval base on the west coast of Australia.

As of 2008[update], Stirling is home to five frigates and all submarines of the Australian Submarine Service, which is headquartered at the base. A Clearance Diving Team is also based at Stirling.

Since completion of the facility, public access to the island has been restricted to daylight hours. However, as of June 2010 public access is not granted to the public in general, via the causeway/bridge, unless entry is sponsored by the military. Access by sea is restricted to private boat using moorings, also under daylight curfew conditions. The island is classified as an A-class reserve, and the Navy has undertaken various successful programmes for the removal of introduced animals; all native animals on the island are protected.

All content from Kiddle encyclopedia articles (including the article images and facts) can be freely used under Attribution-ShareAlike license, unless stated otherwise. Cite this article:
Garden Island (Western Australia) Facts for Kids. Kiddle Encyclopedia.