It is the county flower of Cumberland in England, and appears on its flag.

The name comes from ancient Greece: evidently the cattle on Mount Parnassus appreciated the plant; hence it was an "honorary grass". The species epithet palustris is Latin for "of the marsh" and indicates its common habitat. It was described by the Greek physician Dioscorides, growing up a mountain in 1st century A.D.

It is not a grass, nor does it look like one, but grows from a short underground stem. It has long stemmed heart-shaped leaves, which are 4-12 in (10–30 cm) long. In the centre of the leaf, is the flowering stem. The stem holds a solitary white flower, blooming between July and October. The flower has 5 stamens around the centre. The flower produces a honey-like scent to attract pollinators.

Parnassia palustris is native to northern temperate parts of Eurasia. Found in wet moorlands and marshes of northern England and Scotland. 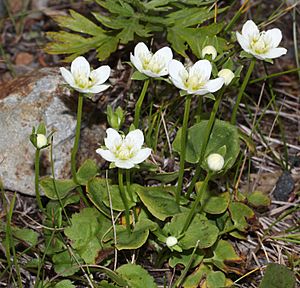 It was once used in herbal medicines, to treat disorders of the liver. Also an infusion of the leaves, (similar to a tea) was used to treat indigestion. When added to wine or water, the leaves are claimed to dissolve kidney stones.

All content from Kiddle encyclopedia articles (including the article images and facts) can be freely used under Attribution-ShareAlike license, unless stated otherwise. Cite this article:
Parnassia palustris Facts for Kids. Kiddle Encyclopedia.