Parnell railway station is a station serving the inner-city suburb of Parnell in Auckland, New Zealand. It is situated on the Newmarket Line, approximately 600m north of Parnell Tunnel, and is located in the Waipapa Valley adjacent to Auckland Domain. It serves Southern Line and Western Line trains. Onehunga Line trains currently pass through the station without stopping.

The station opened on 12 March 2017 with relatively basic facilities and initially serving a limited number of lines. Future development will involve building a pedestrian bridge across the tracks to provide step-free access to the platforms, and constructing several new paths to provide more direct access to Auckland Domain, Parnell Town Centre and the University of Auckland.

It was originally intended that the station would eventually serve all three lines which pass through it. This was contingent on the removal of the Sarawia Street level crossing in Newmarket, removing the signalling constraints which affected the line. A bridge built to replace the level crossing, linking Laxon Terrace with nearby Cowie Street, allowed the removal of the crossing. 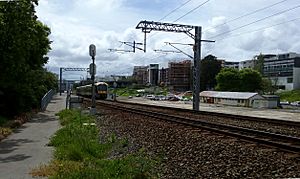 The Parnell railway station under construction. View from the Auckland Domain entrance to the station (looking north towards the platforms). An AM class train is passing through the station and one building from the former Mainline Steam depot is visible in the background. 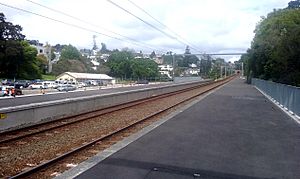 Parnell Station under construction, with platforms and some fences complete, but no facilities or shelters.

After a plan to lease part of the area as a bus depot was cancelled, KiwiRail and Auckland Council were asked in 2010 by the outgoing Auckland Regional Council to make an early start on construction of the proposed station, which was to cost $13 million or more, to ensure that there would not need to be costly extra work after the electrification of the line as part of the Auckland railway electrification. It was proposed that several million dollars saved during the upgrade of the Newmarket station be allocated to this new station. 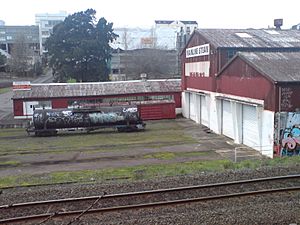 An early proposal was to integrate the new station with some of the historic railway workshop sheds of the adjacent Mainline Steam depot but nothing eventuated. The Mainline Steam Heritage Trust had its lease on the depot terminated by KiwiRail and completed its move from the site in June 2015. The sheds were demolished in September 2015.

The heritage station building from the Newmarket station (a historic building designed by George Troup and built in 1908 that was removed during a 2008–10 upgrade) was relocated onto the Parnell station platform in 2016-17. As of early 2019, the station building is used to house artist studios and a gallery.

In late 2015, Auckland Transport advised that opening the Parnell station to passenger services was being postponed until the completion of a road bridge at Cowie Street, replacing the nearby level crossing on Sarawia Street. AT received approval from independent planning commissioners in June 2016. The following November, the commissioners' recommendation for the bridge was appealed. If AT had been unable to address the concerns expressed in the appeal, an Environment Court hearing (most likely in early 2017) would have decided whether the appeal would be upheld.

Trains began operating at the station on 12 March 2017, with an official opening by Mayor of Auckland, Phil Goff, and Waitematā Local Board chair Pippa Coom on 13 March 2017.

In July–August 2018, the Cowie Street bridge to Laxon Terrace was completed and opened and the Sarawia Street level crossing was closed to road traffic. As a result, a new timetable introduced on 26 August 2018 allowed Parnell to become a stop on all Southern Line and Western Line services.

The station is located next to the Auckland Domain, where the Auckland War Memorial Museum is situated. The two side platforms are linked by a subway.

All content from Kiddle encyclopedia articles (including the article images and facts) can be freely used under Attribution-ShareAlike license, unless stated otherwise. Cite this article:
Parnell railway station Facts for Kids. Kiddle Encyclopedia.