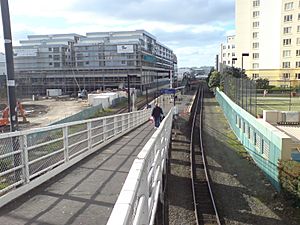 The old station in 2007, viewed from Remuera Road 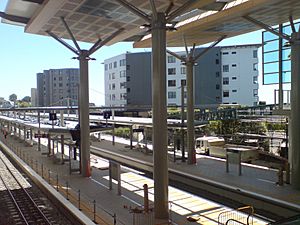 The new station under construction in 2009

Newmarket railway station is a station in the inner-city suburb of Newmarket in Auckland, New Zealand. It serves the Southern, Onehunga and Western Lines of the Auckland railway network, and is the second-busiest station in Auckland, after Britomart.

The station was opened in 1873. It was completely rebuilt between 2008 and 2010 and now consists of two island platforms serving three tracks with a concourse above the southern end of the station. The redeveloped station opened on 14 January 2010.

The station was opened in 1873 and in its historical configuration it consisted of a single island, accessed by a ramp from Remuera Road (opposite Nuffield Street) and by a pedestrian overbridge which led to Broadway and Joseph Banks Terrace. The original station building was one of four island platform station buildings in Auckland designed and built by George Troup, Chief Engineer for the New Zealand Railways Department. It was built in 1908, at the time of the installation of double track.

The signal box at the northern end of the platform was built at the same time and was one of the few of that era on its original site and still in operation in the late 20th century, being the last full-sized lever frame box on the national network.

Newmarket was also the site of Newmarket Workshops, which opened in 1878, and closed in 1927, when Otahuhu Workshops opened.

The historical configuration of the station, near Newmarket Junction (the junction of the Western and Southern Lines), forced some unusual movements. Trains from the city had to run past the junction to call at the station, as they do to this day. There were two platforms in an island configuration, and all city-bound trains stopped at one platform, outbound trains stopping at the other. This was confusing as the outward-bound platform served both the Southern and Western Lines. This problem was partially solved by 'splitting' the platform into two: Southern Line trains stopped at the southern end of the platform, Western Line at the northern end. However the platform was short, so that this did not always resolve the confusion.

The above practice became less prevalent following the higher frequency of the July 2007 timetable. From then trains used whichever platform was free, and could arrive without any indication of destination. Off-peak operations usually followed the traditional practice, but during the peak this was not practical. This led to passengers' confusion as to which train ran on which line.

During peak times, Veolia staff were often present with megaphones to inform passengers of train destinations. The signal box was attended 24 hours per day and had control of all trains within the station and Junction.

For many years, outbound Western Line trains reversed into a special siding, which allowed them to enter the Western Line. In July 2007, this reversing procedure ceased to be necessary, with the start of rebuilding as part of Project DART. However, the project stalled, and as of 2019, the backshunt process continued even after electrification and the rebuild of the station itself.

The fate of the historically and architecturally significant old station building was controversial, with various proposals being put forward to demolish, refurbish, or relocate the building. Following the announcement on 14 March 2007 of the budget for the station's upgrade, Minister of Finance Michael Cullen announced that $5 million would be put towards moving the building, possibly to a proposed new station at Parnell where it would serve as a station for the Auckland War Memorial Museum in the Auckland Domain. 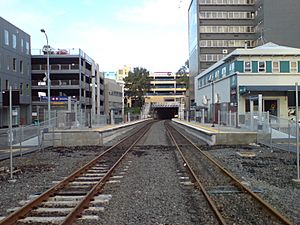 Newmarket West, one of two temporary stations that served the area while the new station was being built 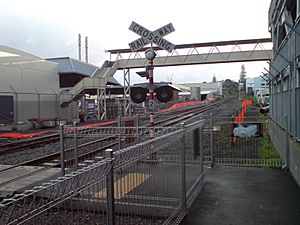 Newmarket South, the other temporary station

Newmarket station was rebuilt for NZ$35 million between January 2008 and January 2010 as part of ONTRACK's Project DART. It was necessary to close the station for the rebuild and two temporary stations were built: Newmarket South, approximately 200m south on the Southern Line, and Newmarket West (also called Kingdon Street) on the Western Line. Both stations were demolished later. As well as modernising the facilities and appearance, the redevelopment improved connections between the station and the surrounding commercial and residential areas. The station now has a concourse level above the platforms, and entrances from a new square off Broadway, a 65m long covered bridge (capable of carrying emergency vehicles) off Remuera Road, and a pedestrian bridge from Joseph Banks Terrace, from the Remuera side.

The station retains the option of extending the concourse, with pedestrian entry off Broadway further north possible in the future. The current entrance off Broadway may also be widened, with Auckland Council considering demolishing two shops to widen the passage. Some criticism was made at the time of opening about the high step up into trains, which was considered necessary by the designers to allow freight trains to pass the platforms. Authorities noted that this was the same height as at other stations throughout the Auckland system with the exception of Britomart, which does not have freight trains passing. Authorities confirmed the vertical distance to step up to some train carriages would be up to 374 mm, but this would be reduced with the introduction of the new carriages specifically designed for the electrification of the Auckland network. 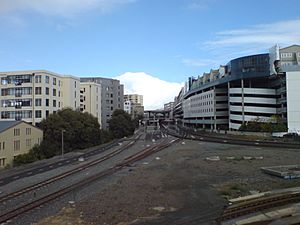 A view of the station from the north, showing the new track layout

Integral to the redevelopment was the requirement to reorganise the track layout. The new station has twin islands and three tracks. Each island has two platforms, although currently Platform Two is not in use for passenger services. Generally Platform One serves westbound services on the Western Line. Platform Three serves Britomart bound services on all three lines (Western, Onehunga and Southern), while Platform Four serves southbound services on the Onehunga and Southern Lines. The station cost an estimated NZ$25 million to redevelop (paid for by ARTA), and ONTRACK spent around NZ$45 million to change the layout. The project has been called the most challenging in the whole upgrade of Auckland's railway network.

Western Line trains reverse direction to leave the station, requiring the driver to get out and walk to the other end of the train and adding two to three minutes to each trip. 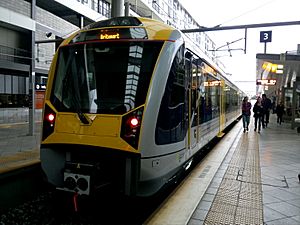 An AM class train at Newmarket Station on the day of their introduction to passenger services.

On 27 April 2014, Auckland's new AM class electric trains were debuted to the general public in a celebratory open day held at Britomart Transport Centre. As part of the day's events, 5000 Aucklanders were able to take a free ride on one of the new trains from Britomart, to Newmarket station and back.

The station and its architects, Opus and Herriot + Melhuish:Architecture, won best building award in the "Urban Design" category in 2011, awarded by the New Zealand Institute of Architects.

All content from Kiddle encyclopedia articles (including the article images and facts) can be freely used under Attribution-ShareAlike license, unless stated otherwise. Cite this article:
Newmarket railway station, Auckland Facts for Kids. Kiddle Encyclopedia.