Swanson railway station is a station on the North Auckland Line in Auckland, New Zealand.

Western Line services of the Auckland rail network are operated between the station and Britomart in central Auckland by Transdev, on behalf of Auckland Transport.

The station is the westernmost and northernmost point of the city's electrified network. It became the terminus of the Western Line in July 2015, when urban train services to Waitakere station ceased because the Waitakere-Swanson section of track was not electrified. A bus shuttle service operates between Waitakere and Swanson stations.

The current station building was relocated from Avondale railway station following an upgrade there. 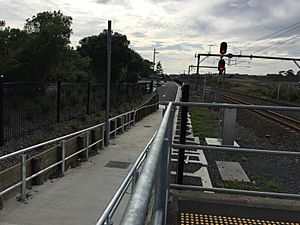 Footpath leading to a carpark.Photo faces east and is taken from platform 1. 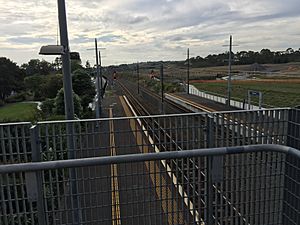 A photo of the platforms as well as tracks leading into the station. Photo faces east. 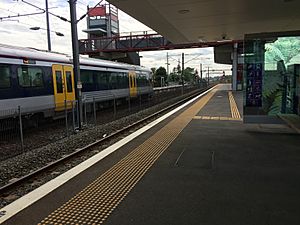 All content from Kiddle encyclopedia articles (including the article images and facts) can be freely used under Attribution-ShareAlike license, unless stated otherwise. Cite this article:
Swanson railway station Facts for Kids. Kiddle Encyclopedia.