Avondale railway station is on the Western Line of the Auckland railway network. Relocated in 2008, the station can be accessed from St Jude St, Layard St, and Crayford St.

The proposed Avondale–Southdown Line would connect to the Western Line just east of the station. 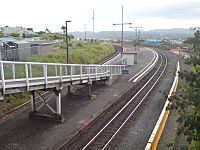 The old station just prior to demolition at the end of 2008. The new station is located around the bend to the left.

Until 26 December 2008 it had an island platform just west of Blockhouse Bay Road, reached via a footbridge off the road. In 2010 an upgraded station was built on Layard Street, north of the St Jude Street level crossing and approximately 100m west and 200m south of the old station.

The new station provides better connections with the Avondale town centre and the platform is on a straight section of track, unlike the old platform which was on a large sharp curve.

Electrification work was completed and the station began serving electric trains in 2015.

All content from Kiddle encyclopedia articles (including the article images and facts) can be freely used under Attribution-ShareAlike license, unless stated otherwise. Cite this article:
Avondale railway station, Auckland Facts for Kids. Kiddle Encyclopedia.