Morningside railway station is a station on the Western Line of the Auckland Railway Network. It has an island platform and is accessed via a level crossing on Morningside Drive and by a subway from New North Road. 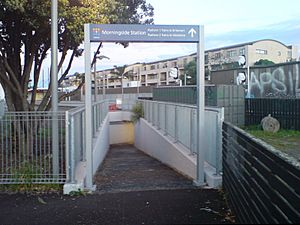 The underpass that links New North Road and Morningside Station in 2010.

Morningside Station was featured in the music video for Lorde's song "Royals".

All content from Kiddle encyclopedia articles (including the article images and facts) can be freely used under Attribution-ShareAlike license, unless stated otherwise. Cite this article:
Morningside railway station, Auckland Facts for Kids. Kiddle Encyclopedia.