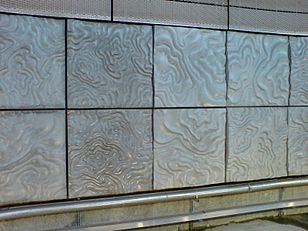 Wall panels in the trench are to evoke both land contours and clay works / pottery heritage of the New Lynn area.

New Lynn railway station is on the Western Line of the Auckland railway network, New Zealand, and is part of an integrated transport centre where transfers can be made to and from bus services. A redeveloped station in a new rail trench was opened on 25 September 2010. LynnMall, a major shopping mall, is close by.

In the late 2000s, local and regional government, as part of the revitalising of the regional rail commuter network, decided to build a new "feature station" at New Lynn, which included sinking the tracks and station into a trench. Road was grade-separated from rail to enable vehicle traffic to pass over the line. Before the trenching works, the level crossings in the town centre were often blocked by passing trains, leading to substantial road congestion, which would have only increased with more train services.

The new rail trench and associated sunken station were to be constructed with up to 16m deep diaphragm walls using specially imported cranes and specialists. This was required due to the unstable, water-logged soils and the need to avoid settlement damage to close by buildings. The procedure to construct the 1 km of trench (with finished depth of up to 8m) involved multiple temporary shifts of the railway line and of various associated roads, and was called the most difficult part of the DART railway development programme in Auckland. Wet ground conditions had also forced a redesign of the trench methods, and delayed the project start by six months.

All content from Kiddle encyclopedia articles (including the article images and facts) can be freely used under Attribution-ShareAlike license, unless stated otherwise. Cite this article:
New Lynn railway station Facts for Kids. Kiddle Encyclopedia.