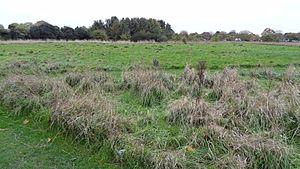 Parsloes Park is a 58 hectare public park in Dagenham in the London Borough of Barking and Dagenham. It is owned and managed by the borough council. A small area opposite the Wren Road entrance is managed for wildlife and designated as a Local Nature Reserve called Parsloes Park Squatts.

The park derives its name from the Passelewe family, who owned the land in the thirteenth century. The land was acquired by the London County Council in 1923. The park was opened by MP Christopher Addison on 13 July 1935, marking the official completion of the Becontree estate. It has a children's play area, football pitches, tennis courts, a basketball court, a bowling green, and a lake. Parsloes Park Squatts is an area of rough acid grassland with a historic hedge.

There are entrances in Parsloes Avenue, Gale Street and Wren Road.

Parsloes is also a ward of the London Borough of Barking and Dagenham. The population of the ward at the 2011 Census was 9,839.

All content from Kiddle encyclopedia articles (including the article images and facts) can be freely used under Attribution-ShareAlike license, unless stated otherwise. Cite this article:
Parsloes Park Facts for Kids. Kiddle Encyclopedia.