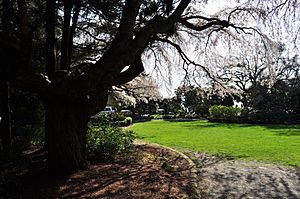 Parsons Gardens Park (also called Parsons Memorial Garden) is a 0.4-acre (0.16 ha) city park in the Queen Anne neighborhood of Seattle, Washington. It was called by Fodors a "a prim urban oasis", and by another guide a "secret garden for non-tourists". The park sits at one end of West Highland Drive, across the street from Betty Bowen Viewpoint and not far from better-known Kerry Park.

According to the city Parks Department and city guides by Lonely Planet and others, the location is popular for summer weddings.

The park is a designated City of Seattle landmark.

The location was previously the private garden of the home of Reginald and Maude Parsons since 1905. In 1956 their children donated the property to the city.

All content from Kiddle encyclopedia articles (including the article images and facts) can be freely used under Attribution-ShareAlike license, unless stated otherwise. Cite this article:
Parsons Gardens Park Facts for Kids. Kiddle Encyclopedia.