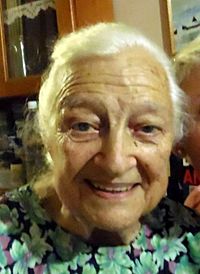 Pavla "Paula" Gruden (14 February 1921 – 26 January 2014) was a Slovenian and Australian poet, translator and editor. Her best known works were Svobodni Razgovori (1982), Snubljenje duha (1994) and Ljubezen pod džakarando (2002). Her writings were in both English and her native Slovenian. She was a member of the Slovene Writers' Association.

Gruden was born in Ljubljana, Kingdom of Yugoslavia (now Slovenia) during World War II. She was sent to Nazi Germany for forced labour. In 1948, she immigrated to Australia.

Gruden died from natural causes on 26 January 2014 in Sydney, New South Wales. She was 92 years old. She was outlived by her son, Danny.

All content from Kiddle encyclopedia articles (including the article images and facts) can be freely used under Attribution-ShareAlike license, unless stated otherwise. Cite this article:
Paula Gruden Facts for Kids. Kiddle Encyclopedia.