Pav bhaji is a fast food dish from India. It consists of a thick vegetable curry served with a soft bread roll. Its origins are in the state of Maharashtra. 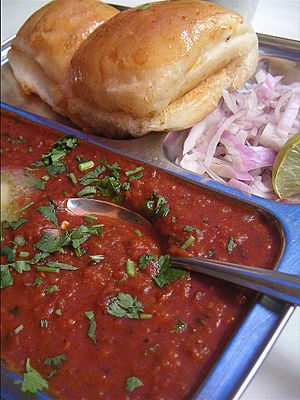 The dish originated in the 1850s as lunchtime fast food for textile mill workers in Mumbai. Pav bhaji was later served at restaurants throughout the city. Pav bhaji is now available at different types of food providers, from simple pushcarts to formal restaurants. It may be found outside of India.

All content from Kiddle encyclopedia articles (including the article images and facts) can be freely used under Attribution-ShareAlike license, unless stated otherwise. Cite this article:
Pav bhaji Facts for Kids. Kiddle Encyclopedia.