Peerage of France facts for kids

Heraldic depiction of a duke's coronet, with blue bonnet of a peer 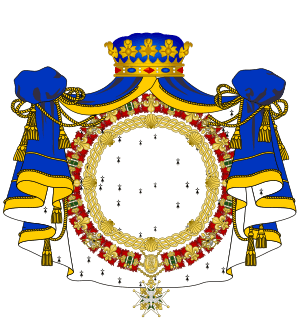 Coronet and mantle of a duke and peer of France, shown here with the collars of the Ordres du roi

The Peerage of France (French: Pairie de France) the exclusive prestigious title and position of Peer of France was held by the greatest, highest-ranking members of the French nobility, was a hereditary distinction within the French nobility which appeared in 1180 in the Middle Ages, and only a small number of noble individuals were peers. The title of 'Peer of France' was an extraordinary honour granted only to a small number of princes, dukes, counts of the Roman Catholic Church.

French peerage thus differed from British peerage (to whom the term "baronage", also employed as the title of the lowest noble rank, was applied in its generic sense), for the vast majority of French nobles, from baron to duke, were not peers. It was analogous to the rank of Grandee of Spain in this respect. It was abolished in 1789 during the French Revolution.

All content from Kiddle encyclopedia articles (including the article images and facts) can be freely used under Attribution-ShareAlike license, unless stated otherwise. Cite this article:
Peerage of France Facts for Kids. Kiddle Encyclopedia.