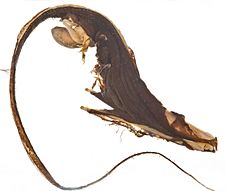 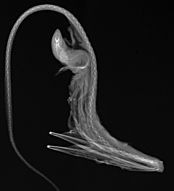 The pelican eel (Eurypharynx pelecanoides) is a deep sea fish. They are rarely seen by humans, although these creatures are sometimes hooked on the nets of fishermen. It is a fish with the shape of an eel.

It is the only known species of the genus Eurypharynx and the family Eurypharyngidae. It belongs to the order Saccopharyngiformes, which are closely related to the true eels.

The pelican eel's most notable feature is its huge mouth, much larger than its body. They can be opened wide enough to swallow a fish much larger than itself. The pouch-like lower jaw is similar to that of a pelican, hence its name. It is also sometimes referred to as the umbrella mouth gulper. The stomach can stretch and expand to to make room for large meals. The eel uses a long, whip-like tail for movement, and the end of the tail is bright enough to attract prey.

All content from Kiddle encyclopedia articles (including the article images and facts) can be freely used under Attribution-ShareAlike license, unless stated otherwise. Cite this article:
Pelican eel Facts for Kids. Kiddle Encyclopedia.