The district is roughly bounded by Bayfront Parkway, Tarragona, Romana and Cevallos Streets. Within the district are the Historic Pensacola Village, the T.T. Wentworth Jr. Florida State Museum and Seville Square. Seville Square and its twin, Plaza Ferdinand VII, were the parade grounds for the Fort of Pensacola established during British rule. In 1559, a site to the northeast of the Pensacola Historic District on the Pensacola Bay is the earliest known European settlement on the North American continent.

In the early 1960s a group of local preservationists led by Pensacolian Mary Turner Rule (née Reed) formed the Pensacola Heritage Foundation, joined the National Trust, surveyed the Seville Square Historic District, the neighborhood around Seville Square adjacent to Pensacola Bay. Realizing the importance of Pensacola's history and the need to save it, Rule and the Heritage Foundation conducted the research and submitted the paperwork to have the Pensacola Historic District listed on the National Register of Historic Places. The group purchased the important Dorr House on the square, restoring it with their own labor starting the preservation movement. They convinced the city to bring the deteriorated square to its present-day restored state. Then they created a festival, a hometown Victorian picnic in the park, An Evening in Old Seville Square, to bring Pensacolians to the district encouraging restoration. Rule had the famous lighthouse at the Navy Air Station listed on the National Register. She also helped create a state board now called the N.W. Florida Preservation Board, whose function is to protect the Seville Square Historic District and Pensacola's history. The city established the Architecture Review board to protect Pensacola's history locally. 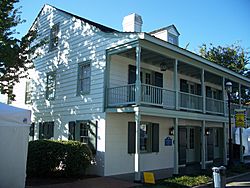 Tivoli High House, ticket and information center for the Village.

Historic Pensacola (located within the Pensacola Historic District) is a collection of 29 historical buildings and museums managed by the UWF Historic Trust, a direct support organization of the University of West Florida (UWF). Historic Pensacola is located in downtown Pensacola, Florida, situated between Plaza Ferdinand VII and Seville Square. Parking is available behind the T.T. Wentworth Museum, based in the former City Hall.

The Historic Pensacola Village museum complex is largely by UWF staff, some paid UWF students, and many volunteers.

Admission is purchased for a week, and includes access to the entire complex and guided tour of several historic buildings. These buildings can be entered by visitors only during the tour.

The museum complex is open for visitors Tuesday through Saturday, from 10:00 a.m. to 4:00 p.m. The T. T. Wentworth, Jr. Museum is open until 7:00 p.m. Thursday-Saturday and from noon until 4:00 p.m. for Half Price Evenings and Sundays. Members receive free admission for one year.

Certain buildings can be rented out for special occasions. In particular, Old Christ Church is popular for weddings, and the Museum of Commerce is popular for events and receptions.

The buildings in the complex include:

All content from Kiddle encyclopedia articles (including the article images and facts) can be freely used under Attribution-ShareAlike license, unless stated otherwise. Cite this article:
Pensacola Historic District Facts for Kids. Kiddle Encyclopedia.