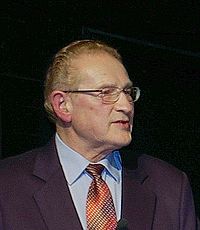 Percy Schmeiser (January 5, 1931 – October 13, 2020) was a Canadian businessman, farmer and politician. He was born in Bruno, Saskatchewan. He was a member of the Saskatchewan Liberal Party.

He became known for independent farmers' rights and the regulation of transgenic crops during his protracted legal battle with multinational agrichemical company Monsanto.

He did plant breeding and grew canola, field peas, mustard and wheat. From 1967 to 1971, he was a member of the Legislative Assembly of Saskatchewan.

Schmeiser died on October 13, 2020 from Parkinson's disease-related problems in Saskatchewan at the age of 89.

All content from Kiddle encyclopedia articles (including the article images and facts) can be freely used under Attribution-ShareAlike license, unless stated otherwise. Cite this article:
Percy Schmeiser Facts for Kids. Kiddle Encyclopedia.