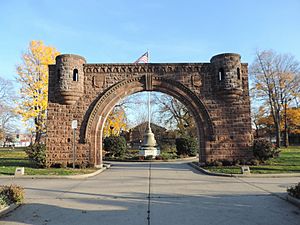 The Arch of the 4th Regiment Armory was dismantled in 1927 was relocated and reconstructed in 1941.

Pershing Field is a city square and park in the Heights of Jersey City, New Jersey in the United States. Approximately 13.5 acres (5.5 ha) it is adjacent to Jersey City Reservoir No. 3, with which it creates a large open recreational and nature area bounded by Summit Avenue, Central Avenue, and Manhattan Avenue. 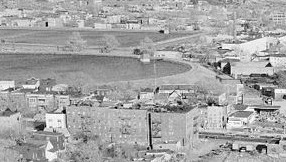 The site had been intended for a reservoir, and extension of the system connected to Reservoir #3. The park, originally planned in 1918 as Reservoir Park, opened for track and field events in 1919, including those of the Amateur Athletic Union, as well as other passive and recreational activities. It was designed by the noted landscape architect Charles N. Lowrie, responsible for Lincoln Park and the Stephen R. Gregg Park in Bayonne. Dedicated in 1922. the park was named for General John J. Pershing, associating it with the previous use of the grounds as a World War I military training ground. Although invited, General Pershing declined an invitation to attend the July 4 opening ceremony with a letter of apology. It continued to be used for track meets into the 1930s, hosting Stanisława Walasiewicz and Babe Didrikson Zaharias, among others.

Over the years it has come serve as a memorial park for servicemen since World War I. At Summit Avenue there is a large arch made of reddish sandstone, the only remnant of the Fourth Regiment Armory building that once stood at the site of the Hudson Catholic Regional High School. It was reconstructed in Pershing Field in 1941 and later named a Jersey City designated historic site. Nearby are plaques in honor of Jersey City Mayor Frank Hague and New Jersey Governor A. Harry Moore. A statue America Triumphant designed by James Novelli, commemorates the 147 Hudson County residents who lost their lives during WW1. Other commemorative monuments to US military personnel are the Korean War memorial dedicated on Armistice Day, November 11, 1998, and the Jersey City Vietnam Veterans Memorial on Memorial Day, May 28, 2001. Along the walking paths throughout the park are small stone markers with plaques bearing the names of veterans from both World Wars. The Heights Vietnam Veterans Memorial Community Center was dedicated in 1986.

At the Central Avenue side of there are number of recreational venues for track, baseball, and tennis as well as a swimming pool and a skating rink. A children's playground is at the southern end of the park.

All content from Kiddle encyclopedia articles (including the article images and facts) can be freely used under Attribution-ShareAlike license, unless stated otherwise. Cite this article:
Pershing Field Facts for Kids. Kiddle Encyclopedia.