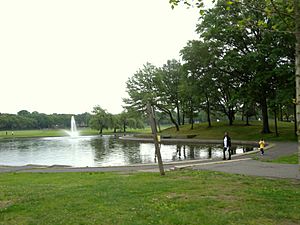 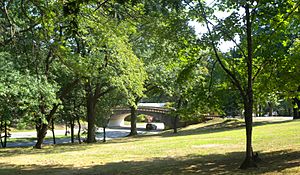 Charles Nassau Lowrie (April 8, 1869 – September 18, 1939) was an American landscape architect and designer. He was one of eleven founding members of the American Society of Landscape Architects in 1899 and was active in the City Beautiful Movement.

He was a member of the New York's Municipal Art Society. He was in charge of landscaping Red Hook Houses, a housing project in Brooklyn. He was on the 1939 New York World's Fair staff.

Lowrie designed the 20th century master plan for University of Connecticut's campus in Storrs, Connecticut. He made the first master plan developed for University Park, Pennsylvania State University. He was also involved in city planning for Columbus, Ohio Lowrie made preliminary plans for a competition for a Roosevelt Memorial in Washington, DC, which was eventually never built.

In 1917, Lowrie was hired by William and Gertrude Ritter to prepare a landscape plan for the grounds of their new home in Manchester, Vermont. Known as "Yester House," the property is now home to the Southern Vermont Arts Center.

Some of his professional papers are archived at Cornell.

He died in New York and was buried in Lawrenceville, New Jersey.

All content from Kiddle encyclopedia articles (including the article images and facts) can be freely used under Attribution-ShareAlike license, unless stated otherwise. Cite this article:
Charles N. Lowrie Facts for Kids. Kiddle Encyclopedia.