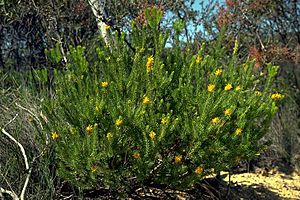 Persoonia acerosa, commonly known as needle geebung, is a species of flowering plant in the family Proteaceae and is endemic to a restricted area of New South Wales. It is a shrub with small, channelled, needle-like leaves, yellow tubular flowers and yellowish-green, pear-shaped fruit.

Persoonia acerosa was first formally described in 1827 by Josef August and Julius Hermann Schultes in their book Mantissa in volumen primum [-tertium] :Systematis vegetabilium caroli a Linné from an unpublished description by Franz Sieber.

Needle geebung grows in heath, scrubby woodland and forest on sandstone on the Central Coast and from the central Blue Mountains to the Hill Top district in New South Wales at altitudes of 550–1,000 m (1,800–3,280 ft). It is mainly found in the upper Blue Mountains and is believed to be extinct at Hill Top.

All content from Kiddle encyclopedia articles (including the article images and facts) can be freely used under Attribution-ShareAlike license, unless stated otherwise. Cite this article:
Persoonia acerosa Facts for Kids. Kiddle Encyclopedia.