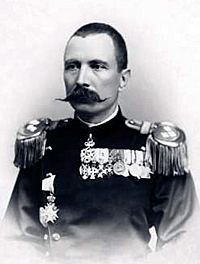 Petar Bojović (Serbian: Петар Бојовић 16 July 1858 in Miševići, Nova Varoš – 19 January 1945 in Belgrade) was a Serbian military commander. He fought in the Serbo-Turkish War, the Serbo-Bulgarian War, the First Balkan War, the Second Balkan War, World War I and World War II. Following the breakthrough on the Thessaloniki Front he was promoted to fourth Serbian Field Marshal (Voivoda).

In World War I as commander of the First Army, he broke through the lines on the Salonika front. His army advanced deep into enemy territory. For this he was given the title of Duke. In 1945, after World War II ended, he was beaten severely by partisans. They decided to take his house for themselves. He died soon after of his injuries.

All content from Kiddle encyclopedia articles (including the article images and facts) can be freely used under Attribution-ShareAlike license, unless stated otherwise. Cite this article:
Petar Bojović Facts for Kids. Kiddle Encyclopedia.