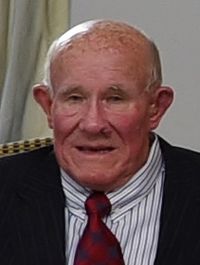 Peter John Cartwright CNZM QSO CStJ (3 May 1940 – 17 April 2019) was a New Zealand lawyer. He was the husband of Dame Silvia Cartwright (née Poulter). He was the viceregal consort of New Zealand between 2001 and 2006, when his wife was serving as the 18th Governor-General of New Zealand. He was the chairman of the Medical Practitioners Disciplinary Tribunal, the Indecent Publications Tribunal and the Broadcasting Standards Authority. He was born in Dunedin. He went to a boarding school in Christchurch.

All content from Kiddle encyclopedia articles (including the article images and facts) can be freely used under Attribution-ShareAlike license, unless stated otherwise. Cite this article:
Peter Cartwright (lawyer) Facts for Kids. Kiddle Encyclopedia.