Peter Høeg Gade (born December 14, 1976 in Aalborg, Denmark) is a retired Danish professional badminton player. He currently resides in Holte in Copenhagen. He has two children with the former handball player Camilla Høeg.

Gade made his mark in badminton history through his All England Open Badminton Championships singles title in 1999 and his five European Championships crowns in the men's singles event. He topped the world rankings from 1998 to 2001. With his 22 Grand-Prix titles, he has become one of the sport's most successful players. On June 22, 2006, he briefly recaptured the number one spot in the world rankings. This was achieved after winning the Singapore Open and reaching the quarter-final at the Malaysia Open.

With his defeat in the quarter-finals of the 2012 French Open Gade retired from international competition.

His playing style is known for fast attacks, smooth footwork and constant pressure. His deception is particularly creative for a world badminton player, and he uses a widely recognised and highly successful "trademark shot" (the so-called "double action" of the racket sends the shuttle to the back of the court, while aiming to bring the player towards the net). With a plethora of deceptive shots, he has been known to win points from more outrageous attempts, such as the reverse forehand and backhand (using the opposite side of the racket head to the one anticipated, to make contact with the shuttlecock at a radically different angle). 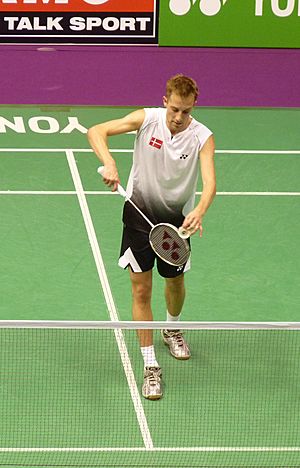 All content from Kiddle encyclopedia articles (including the article images and facts) can be freely used under Attribution-ShareAlike license, unless stated otherwise. Cite this article:
Peter Gade Facts for Kids. Kiddle Encyclopedia.