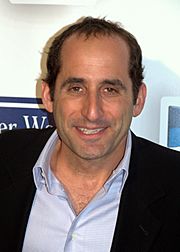 Peter J. Jacobson (born March 24, 1965) is an American movie, television, stage, and voice actor. He played Randy Dworkin in Law and Order, and Dr. Taub in House. He also did the voice of Acer in Cars 2. Jacobson was born in Chicago, Illinois to Walter Jacobson. He studied at Brown University.

All content from Kiddle encyclopedia articles (including the article images and facts) can be freely used under Attribution-ShareAlike license, unless stated otherwise. Cite this article:
Peter Jacobson Facts for Kids. Kiddle Encyclopedia.