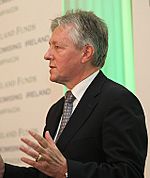 Peter Robinson is the First Minister of Northern Ireland and leader of the Democratic Unionist Party.

He was elected the Member of Parliament for the constituency of Belfast East during the 1979 General Election and was elected to the Northern Ireland assembly in 1998. He was the Minister for Regional Development from November 1999 to July 2000 and again from October 2001 to October 2002. Robinson was Minister of Finance and Personnel from May 2007 to June 2008. On 31 May 2008 the leader of the DUP Ian Paisley resigned and Peter Robinson was chose to replace him as First Minister and DUP leader.

All content from Kiddle encyclopedia articles (including the article images and facts) can be freely used under Attribution-ShareAlike license, unless stated otherwise. Cite this article:
Peter Robinson Facts for Kids. Kiddle Encyclopedia.