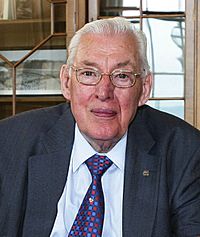 Ian Paisley was the founder and long-time leader of the Democratic Unionist Party.

Ian Richard Kyle Paisley, Baron Bannside (6 April 1926 – 12 September 2014) was a politician and church minister in Northern Ireland. He founded the Democratic Unionist Party (DUP) in 1971 and was its leader until May 2008.

He was born in Armagh and grew up in Ballymena. He founded the Free Presbyterian Church of Ulster in 1951 and was a Member of Parliament (MP) for the constituency of North Antrim from 1970 to 2010. He was the First Minister of Northern Ireland from May 2007 to June 2008 at the head of an all-party government.

He called himself the Reverend Doctor Ian Paisley.

Paisley died in Belfast on 12 September 2014, aged 88. At the time of his death, Paisley suffered from cardiomyopathy.

All content from Kiddle encyclopedia articles (including the article images and facts) can be freely used under Attribution-ShareAlike license, unless stated otherwise. Cite this article:
Ian Paisley Facts for Kids. Kiddle Encyclopedia.