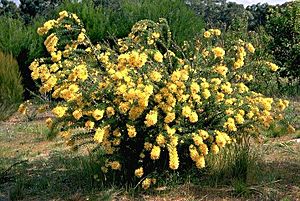 Petrophile serruriae is a species of flowering plant in the family Proteaceae and is endemic to southwestern Western Australia. It is a shrub with crowded, pinnate, needle-shaped, sharply-pointed leaves, and oval heads of silky-hairy yellow, greyish mauve to pink flowers.

Petrophile serruriae was first formally described in 1830 by Robert Brown in the Supplementum to his Prodromus Florae Novae Hollandiae et Insulae Van Diemen from material collected by William Baxter near King George Sound in 1823. The specific epithet (serruriae) means "like a plant in the genus Serruria".

Petrophile serruriae is common in coastal limestone and is widespread from near Geraldton to near Albany in the south-west of Western Australia.

This petrophile is classified as "not threatened" by the Western Australian Government Department of Parks and Wildlife.

All content from Kiddle encyclopedia articles (including the article images and facts) can be freely used under Attribution-ShareAlike license, unless stated otherwise. Cite this article:
Petrophile serruriae Facts for Kids. Kiddle Encyclopedia.