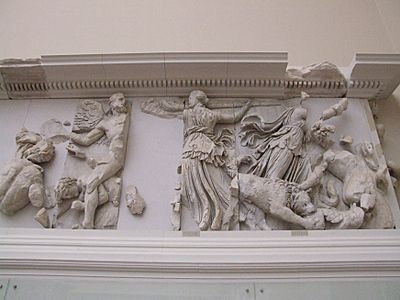 Phoebe is a Titan in Greek mythology. She was associated with the moon. She is the daughter of Uranos and Gaia. She was married to her brother Coeus, and had two daughters: Leto and Asteria. Leto bore Artemis and Apollo, Asteria is the mother of Hecate.

The Olympians beat the Titans in the ten-year war. She and the Titans were summoned by Zeus to Tarturus, in the Underworld.

All content from Kiddle encyclopedia articles (including the article images and facts) can be freely used under Attribution-ShareAlike license, unless stated otherwise. Cite this article:
Phoebe (Titan) Facts for Kids. Kiddle Encyclopedia.