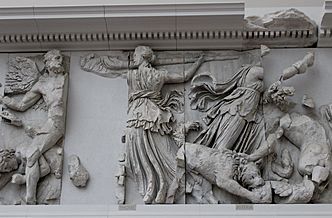 The two women are Phoebe and Asteria, on south frieze of the Altar of Pergamon.

In Greek mythology, Asteria (Ancient Greek: Ἀστερία - "of the stars" or "[the] starry one") was the Titan goddess of falling stars and nocturnal divination, such as astrology. Asteria was apart of the second generation of Titans, the daughter of Koios and Phoebe, and sister of Leto. She is the wife of the Titan Perses, by whom she is the mother of Hecate, goddess of magic and witchcraft. When Zeus began to lust for her, Asteria escaped his advances by leaping into the sea and becoming the floating island Delos, upon which her sister Leto eventually gave birth to the twins Apollo and Artemis. As such, she is often labelled "Delos" on Athenian vase-painting. 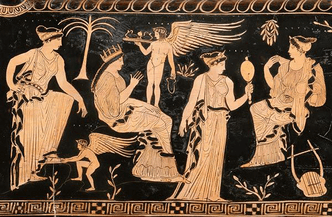 Asteria is the figure on the far right, identifiable by the label above her.

All content from Kiddle encyclopedia articles (including the article images and facts) can be freely used under Attribution-ShareAlike license, unless stated otherwise. Cite this article:
Asteria Facts for Kids. Kiddle Encyclopedia.